The set contains eight PVC figures of Big Bird, Cookie Monster, Elmo, Zoe, Super Grover, Ernie, Bert and Oscar the Grouch in a carryaround cardboard box. The back of the box can be unfolded to reveal a stage and Sesame Street scenery, on which the characters can be displayed.

The figures are based on sculpts that were previously produced by Applause. 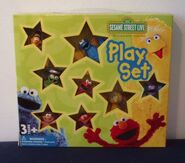 The cast inside the package
Add a photo to this gallery
Retrieved from "https://muppet.fandom.com/wiki/Sesame_Street_Live_Playset?oldid=1099927"
Community content is available under CC-BY-SA unless otherwise noted.