Western Publishing released a series of "Magic Slate Paper Saver" toys featuring Sesame Street characters from the 1970s through the 90s. These were originially published under the Whitman brand, and later under Golden Books. Each slate is a piece of stiff cardboard, with a sheet of cellophane over a soft waxy surface on the front. Using the included red plastic stylus, a child can draw on the cellophane, and then lift the page to erase and start over.

Some of the illustrations at the top of the slates were provided by Sesame storybook artists, including Michael Smollin, the illustrator of The Monster at the End of This Book. 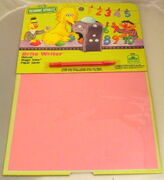 1994, Elmo
Add a photo to this gallery
Retrieved from "https://muppet.fandom.com/wiki/Sesame_Street_Magic_Slates?oldid=1099968"
Community content is available under CC-BY-SA unless otherwise noted.