Before home video was common, Fisher-Price produced "Movie Viewers" for kids where they could hand-crank a film cartridge featuring cartoon and puppet stars. There was no sound, but the cartridges contained actual film cells. Also, the viewer could be cranked as quickly or slowly as desired, and go backwards or forwards. There were both a TV screen version and a more common hand-held crank viewer.

Several cartridges were produced for Sesame Street from 1974 to 1980, including Alphabet, Big Bird's Birthday Party, Cookie Monster in the Kitchen, Numbers, On My Way to Sesame Street, and Sizes. Footage from the show is used as well as new bridging material. 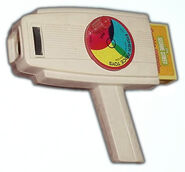 Big Bird's Birthday Party (1977)
Big Bird covers his eyes as a boy leads him into a room where The Kids are throwing a surprise birthday party for him. He is delighted when the others surprise him, and opens a huge gift box from them to find a large bag of birdseed, to which he immediately begins snacking on. Then they play "Pin the Tail on the Donkey," with Big Bird blindfolded and spun around, as the kids try to direct him to the donkey. It takes some doing, but he manages to stick the tail on the right spot. Then when they serve the birthday cake, Big Bird is unable to blow out the candle by himself, so the kids help him, to which the donkey on the wall wags its tail in amusement.

On My Way to Sesame Street

Retrieved from "https://muppet.fandom.com/wiki/Sesame_Street_Movie_Viewer_Cartridges?oldid=1364426"
Community content is available under CC-BY-SA unless otherwise noted.