The Sesame Street News Flash is a recurring Sesame Street segment that features Kermit the Frog as a roving reporter for "Sesame Street News." Reporter Kermit, wearing a trench coat and hat and holding a microphone, interviews characters from fairy tales, nursery rhymes, and other popular stories, even appearing at key moments in history. As with most such parodies, the stories often diverge from tradition.

The first News Flash sketch, where Kermit covers the unfolding story of Rapunzel, premiered in Episode 0409, during Season 4 of Sesame Street. A variation of the segment, entitled "Sesame Street Sports," had Kermit in a flashy sports coat reporting on the race between the Tortoise and the Hare. The skits were no longer produced after 1989, but continued to re-air on the show until 2001. Many of the sketches were featured on Sesamestreet.org, and some appear on the videos Big Bird's Story Time, Silly Storytime, and Fairytale Fun, which include four News Flash segments each.

Some sketches are included here that may not have used the opening Sesame Street News Flash theme music and logo, but can be considered to be a part of the same series as evidenced by the presence of Kermit in his reporter garb, and the manner in which he goes about his duties. In addition to the sketch interruptions to "regularly scheduled programming," Kermit has occasionally served as a Sesame Street News reporter in certain episodes (including Episode 3740, Episode 3785 and Episode 3976) and in specials such as Sesame Street: 20 and Still Counting, Elmo Saves Christmas, and Elmopalooza, among others.

The News Flash often returned to the same story for multiple reports. For example, there were several visits with Cinderella, and a series of interviews with Don Music, etc. The list is alphabetized to order them by theme. Click the arrow to sort by First Appearance.

For instances in which Kermit played a reporter outside of the Sesame Street News Flash segments, see Reporter Kermit.

Fourteen, approximately twenty-second audio reports with Kermit were produced for the computer games Letters and Numbers. These are heard on the radios found in each section of the games. Although Kermit appears in all the pieces, one piece from Numbers features an interview with Professor Alphonse.

New tune-in segments under the "News Flash" banner appeared during season 45 featuring Murray Monster (clad in a necktie) conducting interviews with kids, with Ovejita presenting a word in Spanish.

The Monster Fixers video series (which also involve nursery rhyme parodies) feature Elmo as a "junior monster reporter" for Sesame Street News, holding a microphone with a small version of the classic "News Flash" logo on its flag.

Most of the sketches began with a logo of the words "NEWS FLASH" on a cloud with stars and a lightning bolt against a black background. A news theme written by Joe Raposo (registered with BMI as "Kermit News Theme") consisting of Morse code-like sounds and an urgent-sounding version of the Sesame Street theme was accompanied by an announcer (voiced by Jerry Nelson in most cases) usually saying "We take you now to Kermit the Frog with another fast-breaking news story!" or some variation. The colors on the logo occasionally varied (one version had it in black and white, another in sepiatone), and it would sometimes be superimposed over footage with Reporter Kermit talking with someone off-camera, though it usually had a basic color scheme, as pictured above. In the 1983-1986 News skits, the "NEWS FLASH" text would usually flash on and off.

A few of the sketches originally did not begin with a logo or announcer, including all of the Don Music sketches, though some reruns had said sketches had the opening plastered onto the beginning of the segment. One known early sketch had an alternate logo, too; it featured a title card reading "news bulletin" in big white lowercase letters on top of a blue screen.

The sketches involving Kermit the Frog interviewing Dr. Nobel Price had a variation of the opening where it started with the standard News Flash logo and music, but the announcer would say "Sesame Street News takes you once more to the far-off island laboratory of Dr. Nobel Price, the great inventor, for news of his latest discovery." Halfway through the intro it would fade to an establishing shot of Dr. Nobel Price's island laboratory, after which the sketch would begin from inside the lab. The segment with Warren Wolf did not feature the News Flash logo, just the island establishing shot; the theme music however remained intact, and Michael Earl provided the announcer voice instead of Jerry Nelson.

On the News Flash segments used on Sesame Street: 20 and Still Counting, the standard News Flash logo was used, but with different theme music (which sounded more closer to the Sesame Street theme) and no announcer.

On Elmo Saves Christmas, a new News Flash logo was used, without the cloud and lightning, featuring the text on a red "splotch" symbol on a map of the world. The theme music remained the same, and had Jerry Nelson reprising the role of the announcer. 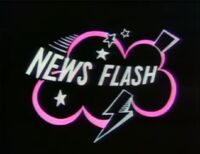 The earliest incarnation of the most commonly seen title card, which was first used on the "Rapunzel" skit. (1972-1973) 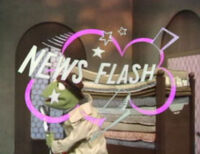 An early variant of the logo, where a superimposed version appears over the action of Reporter Kermit. (1972) 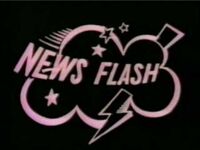 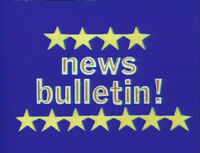 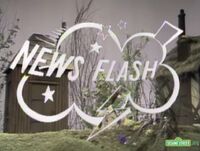 Yet another early variant of the logo, where a superimposed version goes over the action of Reporter Kermit, but also flashes on and off. 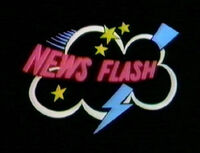 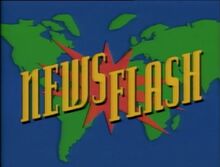 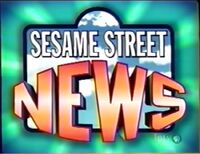 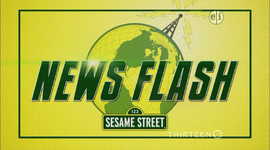 When aired on the international co-productions, many different edits occur. Some cut the title card all together, some leave the original English one in (with the announcer dubbed in the program's native language), and some created their own "NEWS FLASH" intro. 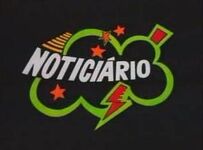 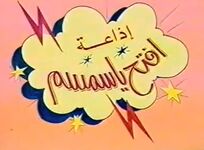 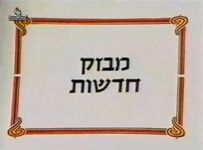 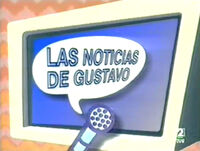 Barrio Sésamo
Add a photo to this gallery