Sesame Street Play n' Carry sets were produced by Tara Toys in the 1980s. Each set came with accessories and one or more (simplified, pawn-like) Sesame Street figures. The playsets could be opened to reveal a diorama, or closed to function as a carry case for the figures and accessoires.

A series of four small sets with one figure each included:

A series of larger sets included: 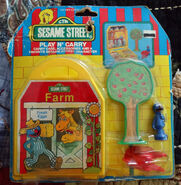 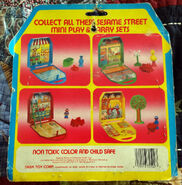 Day Camp
Add a photo to this gallery

The School House was released in The Netherlands, where the Big Bird figure was replaced with a blue variant that resembled Pino.

Add a photo to this gallery
Retrieved from "https://muppet.fandom.com/wiki/Sesame_Street_Play_n%27_Carry_Sets?oldid=1110985"
Community content is available under CC-BY-SA unless otherwise noted.