Big Bird walks into the Sesame Street Post Office and sees Elmo trying to climb into the package chute. Elmo wants to mail himself to his cousin Malcolm so he can show him his drawing of a puppy.

Big Bird suggests that he mail the drawing instead and helps him do so. Meanwhile the little black puppy (who appears in all of the Elmo's Neighborhood books) puts a bone-shaped dog treat in an envelope and addresses it with a paw print. Both envelopes are picked up by a mail carrier. Elmo and Big Bird follow her back to the post office, where the mail carrier explains how Elmo's letter will get to his cousin's house. In one scene we see an airplane in the background with Grover in the co-pilot's seat.

A week later, Elmo gets a letter of thanks from Malcolm. But Elmo can't figure out why Malcolm also says that his dog enjoyed the treat. The little black puppy smiles from behind the park bench. 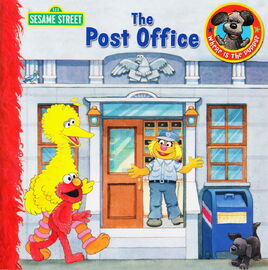 2011
Where is the Puppy? series
Dalmatian Press
ISBN 1453053539
Add a photo to this gallery
Retrieved from "https://muppet.fandom.com/wiki/Sesame_Street_Post_Office?oldid=1100027"
Community content is available under CC-BY-SA unless otherwise noted.