Sesame Street School is a 2001 Sesame Street storybook in the "Elmo's Neighborhood" series. It was reissued in 2009 under the title "The Schoolhouse".

Elmo has been busy looking for the little lost puppy, but today he goes to school. His classmates include Ernie, Bert, Oscar the Grouch, Betty Lou, Zoe, and Grover. Each student has a cubby with his or her name over it. Under the guidance of their teacher, Mrs. Graham, they paint pictures, play with blocks, play dressup, and go to the playground. They also learn about shapes, colors, numbers and the ABCs. They have a snack of juice, crackers, cheese and orange slices. Finally they have show and tell. Elmo shows a dog biscuit and asks if anybody has seen a little lost puppy on Sesame Street. 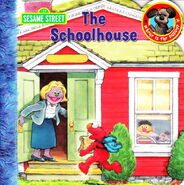