Sesame Street Sing-Along! is a sequel to 1975's Bert & Ernie Sing-Along. This time, Ernie and Bert are driving a bus out to a farm owned by Bert's Uncle Louie. Along the way, as they stop to pick up the rest of the Sesame Street gang, they pass the time by singing songs. At the end of Side 1, the bus runs out of gas and Ernie and Bert had to stop at a gas station to fill it up.

The album was then partially adapted into an episode of the show during season 14 (Episode 1808). Though the episode drops the premise of Ernie and Bert's bus ride, it features many of the songs performed on the album.

Cassette1993
Golden Music
5336
Add a photo to this gallery 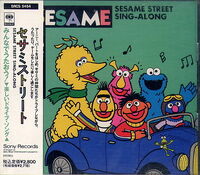 Retrieved from "https://muppet.fandom.com/wiki/Sesame_Street_Sing-Along!?oldid=1378722"
Community content is available under CC-BY-SA unless otherwise noted.