Elmo's mommy takes Elmo on a train trip out of the city to Grover's farm in the country. He is worried about the little black puppy that he's followed through the neighborhood, but the puppy has secretly snuck onto the train. He enjoys paying for his ticket, trying on the conductor's hat, and seeing the flowers and grass out the window as they reach the country.

The story continues in the sequel, Grover's Farm. 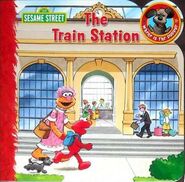 2009"The Train Station"
Where is the Puppy? series
Dalmatian Press
ISBN: 1403789991
Add a photo to this gallery
Retrieved from "https://muppet.fandom.com/wiki/Sesame_Street_Train_Station?oldid=1100098"
Community content is available under CC-BY-SA unless otherwise noted.