TechnoSource produced a line of Sesame Street handheld LCD games in 2006, under the "My First Electronic Game" label.

"Oscar's Trash Time" uses a small LCD screen, housed in a casing in the shape of Oscar and his trash can. During the game, various pieces of garbage appear on the screen, and the player's task is to sort the items into recyclables and trash. The player pushes the left button to recycle cans, bottles and cardboard. The player pushes the right button to throw out apple cores, fish bones and banana peels. The game ends when the player has reached 50 points, or tires of the game completely. The casing comes with a clip that allows the player to attach the game to their backpack, or somebody else's. "Dinner for Dorothy" offers a similar two-button task for Elmo as he feeds Dorothy in her bowl, and "Cookie's Cookie Catch" helps Cookie Monster catch cookies.

"Follow the Leader" broadens the challenge, using four buttons in the shape of Zoe, Cookie Monster, Elmo and Oscar. In this game, characters appear on the screen and say their catchphrases, and the player follows along by pressing the matching buttons. The player is rewarded for competent gameplay with a series of flashes and electronic bleeps. "Tag, You're It!" is essentially the same game, with Big Bird added to the cast, and a casing in the shape of the 123 Sesame Street brownstone. These games bear some significant resemblance to "Make a Match", in which the player is asked to press buttons to match each of the five characters to their favorite items.

In "Pass the Ball", the player presses four buttons to create a lively game of "pass the ball" between Big Bird, Zoe, Elmo and Cookie Monster. The game proceeds at a fast clip, and if a character "misses", then he or she drops out of the contest. The game ends when only one character is left, a lonely victory at best. 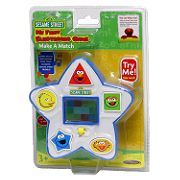 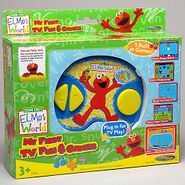 "Elmo's World: My First TV Fun & Games"
Add a photo to this gallery

Retrieved from "https://muppet.fandom.com/wiki/Sesame_Street_handheld_video_games_(TechnoSource)?oldid=1076199"
Community content is available under CC-BY-SA unless otherwise noted.