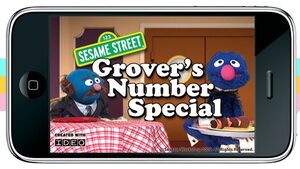 Sesame Workshop has partnered with IDEO ToyLab to release Sesame Street apps with original content for the iPhone, iPod Touch and iPad.

While some of The Muppets Studio's apps are offered internationally, the apps released by Sesame Workshop are only available in select, mostly English-speaking, countries.

Beginning in May 2010, "Elmo's Monster Maker" appeared in a TV commercial for the iPhone.