The Sesame Street laundromat is a place on Sesame Street where its residents can do their laundry. There have been a number of laundromats, or at least changes in location, over the years.

Another laundromat features prominently at the beginning of The Adventures of Elmo in Grouchland during the last half of the song "Together Forever." At this time, the laundromat was located across the street from 123 Sesame Street.

Beginning with Season 39 of Sesame Street, the laundromat has been moved next to Hooper's Store (occupying the space previously home to the Fix-It Shop),[1] where Leela served as its proprietor. Since Leela's departure following season 45, the Laundromat has been seen the care of Nina (Episode 4602), an Anything Muppet man performed by Peter Linz (Episode 4822) and Grover (Episode 4909).

Scenes set in the laundromat have been shot in two different ways. Some scenes use the laundromat as it is shown on-set. Occasionally, however, an expanded version of the space (pictured below) is used, in such episodes as Episode 4161, 4216 and 4228.

The interior of the laundromat
Add a photo to this gallery 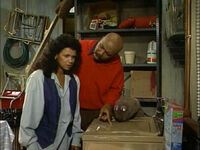 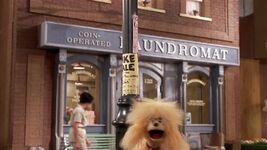 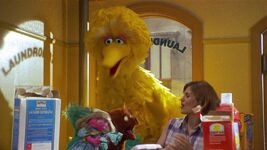 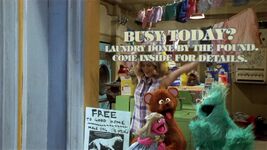 Elmo in Grouchland
Add a photo to this gallery

In the "Big Bird and the Lost Bear" story from Cookie Soup and Other Good-Night Stories, the laundromat was named the Wash and Dry Laundromat where Big Bird finds Granny Bird giving Radar a bath.

Retrieved from "https://muppet.fandom.com/wiki/Sesame_Street_laundromat?oldid=1362753"
Community content is available under CC-BY-SA unless otherwise noted.