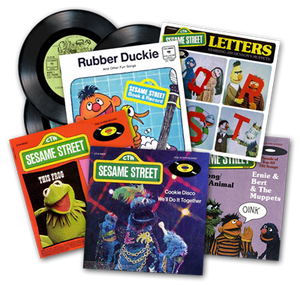 As Sesame Street began to make record albums that featured songs from the show, they also released 45 RPM singles from those albums. The first series of albums on Columbia Records and Warner Bros. Records led to a similar series of 45 RPM singles, which were packaged as book and record sets, with pictures and drawings either taken from or similar to the albums, and lyrics to the songs. Some of these titles were also packaged into boxed sets with cover artwork similar to the album covers.

Some of the songs, such as "Rubber Duckie" and "Sing," proved to be so popular with adults that they were also released as adult pop singles. These records were produced between 1970 and 1973. The "Rubber Duckie" single even reached number 16 on Billboard's Hot 100 Singles chart in 1970.[1]

In 1974, a new series of singles began to be released on the recently formed Sesame Street Records label, which had also begun issuing albums. At first, they were manufactured and distributed by Children's Records of America, and then in 1977 Distinguished Productions took over production, as well as reissuing the earlier CRA singles under their own name. Nearly all of the early songs were re-released in the new series, although they only had simple picture sleeves with no lyrics.

The last commercially released 45 RPM singles in the US were produced in 1979, although several promotional releases were produced until 1984, when the label was finally shut down. There was also a promotional EP released to radio stations in 1985, to promote the release of Follow That Bird.

Several 12" singles were also released over the years, most of them to promote artists who had recorded Sesame songs. However, during the height of disco, 12" singles of songs from Sesame Street Fever were released for DJ's to play in clubs. These contained extended versions and remixes not found on the album.

Retrieved from "https://muppet.fandom.com/wiki/Sesame_Street_singles?oldid=1242101"
Community content is available under CC-BY-SA unless otherwise noted.