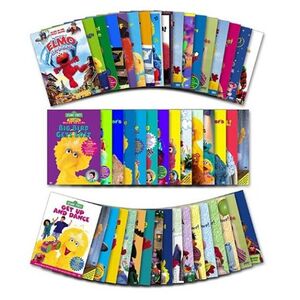 There have been many Sesame Street videos over the years, usually featuring a mix of newly-produced material and segments from the series. Many video releases have also come with such bonus materials as activity booklets and song lyric posters. Many Sesame Street videos revolved around a certain theme, from such learning concepts as letters and numbers, to "best of" videos focusing on certain characters, to music-themed videos. Nearly every direct-to-video Sesame Street production began with a voice-over reading the title as it appeared on-screen.

The first releases of Sesame Street videos on VHS were a couple of storybook videos released by Golden Video in 1985. These two featured stills from various storybooks, with limited animation and voices. Also around this time, Sesame Street's first movie, Follow That Bird, was released on video by Warner Brothers.

In 1987, Random House started releasing Sesame Street television specials on video, with the first specials released on video being Big Bird in China, Don't Eat the Pictures, and Christmas Eve on Sesame Street. Around this time Random House also released another series of videos, Sesame Street Start-to-Read Video. These were similar to the Golden Video releases, being that they featured still images from various storybooks, but unlike those videos, the Start-To-Read videos did not include any animation. Also, while Caroll Spinney, Frank Oz, and Fran Brill provided voices to the Golden Video releases, only Caroll Spinney provided voices to this video series, narrating the videos as Big Bird, and also providing voices of all other characters. Also, in this video series, words appeared on-screen as Big Bird narrated.

In 1990, Random House started releasing another video series, Sesame Songs Home Video. All of these releases were themed around song sketches. The videos came with song lyric posters, and while past video series featured a listing of other videos in those collections on the back covers, this series didn't list other Sesame Songs releases, instead using the space to list the songs that appear on the videos. Also, during that year, Random House released its first two direct-to-video Sesame Street productions to not have segments from the show. These two videos were Sesame Street Home Video Visits the Hospital and Sesame Street Home Video Visits the Firehouse.

Getting Ready for School
1987

Learning to Add and Subtract
1987

Sesame Street Celebrates Around the World
1994

In 1995, Sony Wonder took over distribution of Sesame Street videos, rereleasing many past video releases in addition to releasing new-to-video releases. Unlike the Random House releases, Sony Wonder's releases didn't have a border on the cover, and the back covers featured an image on the back. Unlike Random House (with the exception of the Sesame Songs videos), most Sony Wonder video releases had song listings on the back covers. Sesame Street: 25 Wonderful Years was the only video re-released by Sony Wonder to not have any major packaging changes. With some rereleases (Learning About Letters, Learning About Numbers, etc) the main packaging changes were the lack of a border and different background, while other rereleases (Getting Ready to Read, Play-Along Games and Songs, etc.) had much more significant cover changes. While quite a few video releases from Random House had detailed backgrounds, until 2004 nearly all of Sony Wonder's releases had plain-colored backgrounds.

In 2002, Sesame Street changed its format. One of the changes was to make the street plot one long segment, with no inserts interrupting the plot. Following this change, Sony Wonder started to release videos featuring the street plots from these newer episodes, starting with Elmo Visits the Firehouse. Some releases included two or more street stories. Before the format change, the only videos to feature street plots (with most of the segments edited) were Slimey's World Games and Computer Caper. In 2005, following a number of hurricanes, Sony Wonder released the street scenes from the Season 32 hurricane episodes, edited together for the video release Friends to the Rescue. In 2006, Sony Wonder started to release mostly complete hour-long episodes of the show, in collections such as Old School, featuring episodes from the show's early years, and TV Episode Fun Packs, featuring more recent episodes.

In 2004, Sony Wonder made a significant change to the style of its packaging. While back covers had previously only had one image, now Sesame Street videos featured three to four pictures on the back covers, often with a small caption under the photo. These were originally presented vertically, but later they were presented horizontally (the Elmo's World videos also had a style like this). In 2006, video covers started to have a side border on the right of the cover. Some of these borders resembled the Sesame Street lamppost.

Sing Yourself Sillier at the Movies
VHS, DVD
1997

The Best of Kermit on Sesame Street
VHS
1998

The Adventures of Elmo in Grouchland: Sing and Play
VHS, DVD
1999

The Adventures of Elmo in Grouchland
VHS, DVD
1999 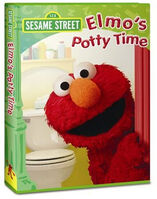 The Letter of the Month Club
DVD
2006

In 2007, Genius Entertainment got the rights to release Sesame Street videos and DVDs. In addition to new-to-DVD releases, Genius rereleased past releases on one DVD each, packaged as Sesame Street Double Features. Afterwards, Genius Products rereleased a number of past DVDs in single-disc, single-program format. 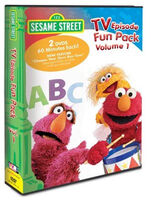 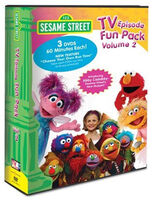 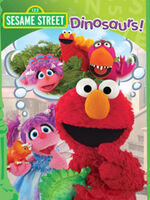 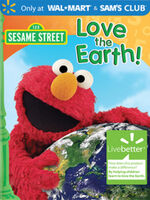 Pirates: Elmo and the Bookaneers
DVD
2009

Elmo and Friends: The Letter Quest and Other Magical Tales
DVD
2009

Genius Products' contract distributing Sesame Street DVDs lasted only two years. Warner Home Video took over video rights in 2010.[1] In addition to rereleasing many Genius titles, Warner usually released one new Sesame Street release per month. In 2012, the releases started to get longer than usual, with some of the single-disc releases promoting "Over 2 hours of fun!" on the covers. Around this time, DVD releases started to occasionally include an existing video release as a bonus feature.

While there had previously been a handful of releases containing full hour-long episodes, most of which were multi-disc releases while a few single-disc releases contained only one hour-long episode, 2012's Elmo's Magic Numbers started a new trend of releasing single-disc releases with two hour-long episodes. However, around this time, Sesame Street DVDs would generally stop including the theme song, with the opening and closing cut from releases of full episodes being cut (though instances of an instrumental version of the theme appearing as an underscore in existing episodes would sometimes be retained). The opening would again be included on video releases as early as 2017, with the opening included in a bonus episode in Elmo and Cookie Monster Supersized Fun (though the closing was still omitted), and the season 46 opening would open the compilation Elmo Loves Animals. Elmo Loves Animals would also be the first Sesame Street DVD where the main program included a mix of full half-hour episodes and street stories. Also starting as early as 2017, videos would no longer open with a title sequence.

Singing with the Stars
DVD
2011

Once Upon a Sesame Street Christmas
DVD
2017

In 2018, Shout! Factory took over the video rights to Sesame Street.

When You Wish Upon a Pickle
digital platforms
2020