Sesameplanet was a Sesamstraat fan website that was created in February of 2003. It was also for Big Bird fans who wanted to know a little more about his relatives all around the world. For short: People that were interested in "The Worldwide Biggest Birds!!!!"

The site was created by Paul Bokdam, who also published The Sesame Times for fans who wanted to keep up with news about Sesamstraat. For them this digital newspaper was translated into English.

In 2006, Bokdam also started with a sub site on Sesameplanet. This site showed all kinds of different international commercial toys from Sesame Street. The site featured pictures from records, hand puppets, PVC's and many other things.

From 2003 through 2007, only Bokdam wrote articles for the site. In 2007 he got some help and slowly the site was turning bilingual. The site was for English-speaking and Dutch-speaking children who wanted to understand what Sesamstraat (behind the scenes) was like.

The site was online until October 26th, 2009. When Geocities stopped its homepages, the site was shut down. 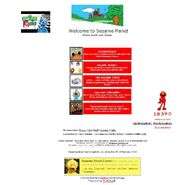 Index of Where to find Big Bird's relatives 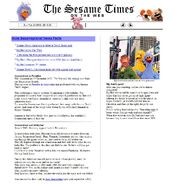 One of the first pages of The Sesame Planet 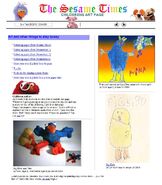 The Merchandise Index
Add a photo to this gallery
Retrieved from "https://muppet.fandom.com/wiki/Sesameplanet?oldid=1100242"
Community content is available under CC-BY-SA unless otherwise noted.