The magazine debuted in 1979, as published by Junior Press. Thee monthly issues could only be purchased in stores. They were direct translations of the German Sesamstrasse magazine. Every now and then, Dutch characters Tommie and Pino would interact with Sesamstrasse characters Samson, Tiffy, and Finchen. Confusingly, the three foreign characters were never introduced to the magazine's readers as characters from the German co-production, nor was an explanation provided as to why they were never seen on Sesamstraat.

After a hiatus, the Sesamstraat magazine returned - sans German characters - in January 1992, as published by De Geïllustreerde Pers. From 1997 to 2011, the monthly magazine could also be received by subscription. In 2015, Panini took over and distributes the magazine through stores; subscriptions aren't possible. Each magazine comes with a small toy or present.

The first issues, published by Junior Press in association with Condor Print & Verlag GmbH, were direct translations of the Sesamstrasse magazine. They had the same format as the German magazine, yet they were printed on thinner paper.

Later issues were slightly smaller. These issues featured material from earlier issues of the German magazine, as well as Het boek van Tommie, Pino en Ienie Mienie and the Dutch translated Sesamstraat Woordenboek. Footage from current episodes were featured on the cover, yet the rest of the photo art and illustrations of the Dutch characters were based on older puppets.

After a hiatus, De Geïllustreerde Pers B.V. published a new monthly Sesamstraat magazine, available in stores. These magazines featured material based on current Sesamstraat episodes, as well as Muppet and non-Muppet material from Sesamstrasse magazines from the early 1970s. Samson, Tiffy and Finchen no longer appeared. Subscriptions to the magazine started in 1997.

1995 issue
Add a photo to this gallery

Some recent magazines published by Panini. 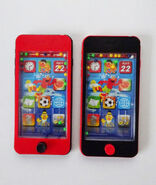 Retrieved from "https://muppet.fandom.com/wiki/Sesamstraat_(magazine)?oldid=1114410"
Community content is available under CC-BY-SA unless otherwise noted.