Seth Meyers (b. 1973) is an American comedian and host of NBC's Late Night with Seth Meyers. Meyers was a cast member of Saturday Night Live from 2001 to 2014, he also served as head writer of the show and as anchor of the Weekend News Update segment.

Kermit appeared with Meyers on the November 19, 2011 broadcast of Saturday Night Live where they performed a "REALLY?!?!" segment on Weekend Update. At the same Weekend Update desk, during the October 6, 2012 show, Meyers interviewed Big Bird.

Meyers appeared on Sesame Street during season 45, presenting the word "greeting" with The Count as the Word of the Day.

Along with SNL staff-writer John Mulaney, Meyers wrote the lyrics for the song "I Can't Believe I'm Hosting SNL" which was sung by the Muppets and Jason Segel on Saturday Night Live in 2011. 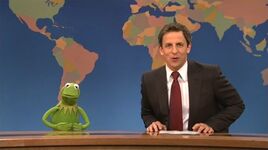 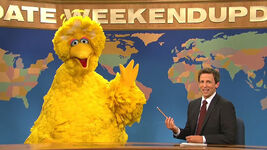 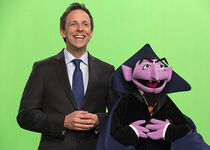 Meyers and the Count
Add a photo to this gallery

Wikipedia has an article related to:
Seth Meyers
Retrieved from "https://muppet.fandom.com/wiki/Seth_Meyers?oldid=1276690"
Community content is available under CC-BY-SA unless otherwise noted.