Seth Rogen (b. 1982) is a Canadian actor/comedian, screenwriter, voice artist, and film producer. His first breakout role was as a regular on Freaks and Geeks.

Rogen first guest-starred on Sesame Street in 2011 and has appeared with the Muppets on several more occasions. On Saturday Night Live, Rogen impersonated Rowlf the Dog in his first two hosting appearances.

Other credits include writing and providing the voice of Lyle McCarthy in The Simpsons episode "Homer the Whopper," guest spots on Family Guy and Dawson's Creek, and starring in the feature films Knocked Up, The Green Hornet and Superbad. As a voice actor, he was heard in the animated features Horton Hears a Who! (as Morton the Mouse), Kung Fu Panda (with Jack Black) and Monsters vs. Aliens (with Reese Witherspoon, Hugh Laurie and Will Arnett).

Rogen owns a Whatnot from The Muppet Whatnot Workshop, which he used as a prop for his scene as Miracle Max in the 2020 Quibi miniseries Home Movie: The Princess Bride.

Rogen and the Muppets with Kumail Nanjiani and Chelsea Peretti. 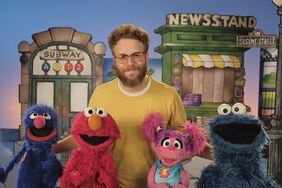 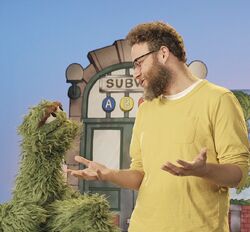 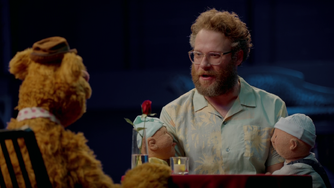 Rogen on Muppets Now
Add a photo to this gallery

Wikipedia has an article related to:
Seth Rogen
Retrieved from "https://muppet.fandom.com/wiki/Seth_Rogen?oldid=1360433"
Community content is available under CC-BY-SA unless otherwise noted.