He is, needless to say, a seven-foot-tall talking carrot. He performed "I Am the Very Model of a Modern Major General" and other selections from The Pirates of Penzance with Gilda Radner in episode 304 of The Muppet Show.

The setup for the gag was that Radner wrote to Kermit before the show, requesting a seven-foot-tall talking parrot for her "Selections from The Parrots of Penzance" number; however, Kermit couldn't read her handwriting and mistakenly booked a carrot. This is a reference to the plot of Pirates, in which the main character, Frederic's father wanted him to be a pilot, but his hard-of-hearing maid misheard it as pirate.

The carrot is featured in The Muppets Character Encyclopedia. 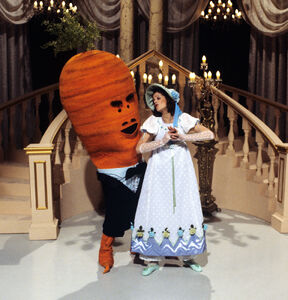 Add a photo to this gallery
Retrieved from "https://muppet.fandom.com/wiki/Seven-foot-tall_Talking_Carrot?oldid=1205479"
Community content is available under CC-BY-SA unless otherwise noted.