"Share It Maybe" is a Sesame Street music video starring Cookie Monster that premiered on YouTube on July 10, 2012, taking its inspiration from a tweet posted on the official Sesame Street Twitter on June 18 which had been retweeted nearly 9,000 times as of the date the video debuted.

In a parody of Carly Rae Jepsen's hit song "Call Me Maybe," Cookie sings about asking people to share their cookies with him as he follows a bowl of cookies around the Sesame Workshop offices. The video features appearances by many Sesame Workshop staff members.

The video references the official music video by featuring a clip of it shown on one staffer's computer screen. Several scenes also spoof the viral video of Jepsen, Jimmy Fallon and The Roots performing the song on classroom instruments backstage on Late Night with Jimmy Fallon. 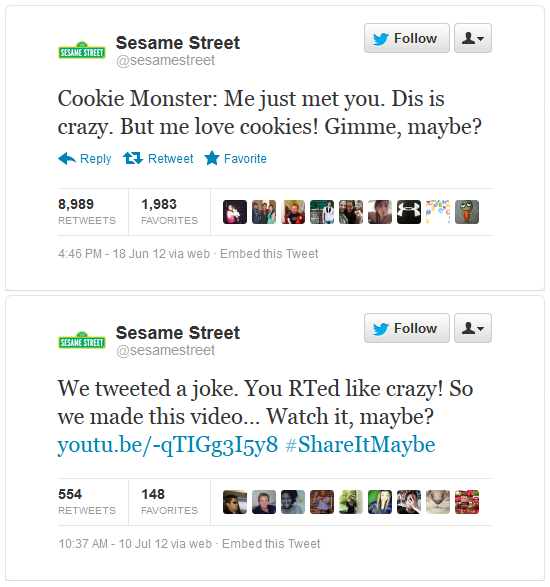 Retrieved from "https://muppet.fandom.com/wiki/Share_It_Maybe?oldid=1137010"
Community content is available under CC-BY-SA unless otherwise noted.