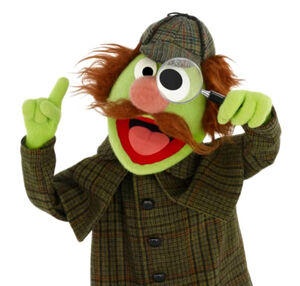 Sherlock Hemlock is a Muppet spoof of Sherlock Holmes, as seen on Sesame Street.

Sherlock is the self-appointed "World's Greatest Detective," dressed in the iconographic Holmes deerstalker cap and Inverness cape, and usually brandishing a large magnifying glass. He prides himself on his powers of observation and does succeed in deciphering small clues, but he seldom arrives at a correct, final solution without assistance. When he does find a clue, he often shouts, "Egad!" He speaks with a British accent and his earliest appearances were often signaled by "detective music" (as Ernie called it), a series of dramatic stings on a piano.

Sherlock first appeared in Episode 0131, the Season 2 premiere, looking for the missing half of Ernie's chicken salad sandwich. Clues revealed that Sherlock himself ate half of the sandwich (he likes chicken salad, doesn't like bread crusts, and one of his buttons was found in Ernie's lunchbox).

Hemlock also appeared in the recurring Caveman Days sketches with Ernie as "The Royal Smart Person."

Though generally one of the less musical Muppets, Hemlock sang "X Marks the Spot!," a dire warning of what the letter/symbol X may signify, first heard on The Muppet Alphabet Album and then on the series itself.

Beginning in Season 20, Sherlock Hemlock starred in all of the Mysterious Theater segments, and by this time he was given a sidekick of sorts: a faithful dog named Watson, who joined his master in the segments and occasional street appearances. Most notably, in a season 22 episode, Sherlock and Watson try to find Maria's sock on a laundry day in her basement, accompanied by the Mysterious Theater theme and host Vincent Twice.

Sherlock's last major appearance occurred in Episode 3424, where the letter X wanted to quit the alphabet. After this, he was only seen in old sketches until the early 2000s. Then, in 2010 for the show's 40th season, Sherlock reappeared on Sesame Street in a brief speaking cameo at Hooper's Store in Episode 4206. He also made a background cameo in The Furchester Hotel episode, "Mystery Weekend."

In 2018, Sherlock appeared during Caroll Spinney's retirement party in the skit where Caroll Spinney meets his wife, puppeteered by Martin P. Robinson. In 2019, Sherlock Hemlock made his first speaking appearance since Nelson's passing in Sesame Street's 50th Anniversary Celebration, performed here by Matt Vogel. He appears in The Not-Too-Late Show with Elmo as an audience member.

In addition to primarily appearing in sketches, Sherlock has appeared in street scenes from time to time. 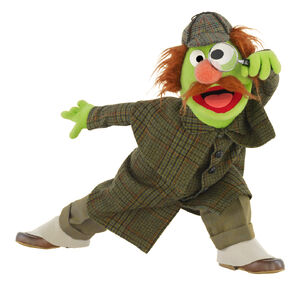