Sherlock Hemlock and the Creatures from Outer Space is a Sesame Street storybook featuring Sherlock Hemlock. Sherlock is reading a book about Outer Space when a storm begins to blow on Sesame Street. The attempts by everyone to seek cover, combined with atmospheric disturbances and strange noices, cause the dectective to believe Aliens from the planet Snarf are coming. 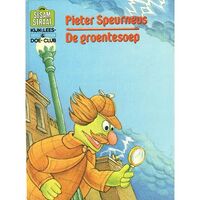 Pieter SpeurneusThe Netherlands
Lekturama, 1987
Add a photo to this gallery
Retrieved from "https://muppet.fandom.com/wiki/Sherlock_Hemlock_and_the_Creatures_from_Outer_Space?oldid=1138850"
Community content is available under CC-BY-SA unless otherwise noted.