Sien is a mother character to Tommie, Ieniemienie, Pino and Purk. She runs the grocery store.

Sien was the last remaining cast member who's been on Sesamstraat since the first episode. She was born in Belgium; during the first seasons, Sesamstraat was a Dutch/Belgian co-production. Since the early Sesamstraat episodes focused on female emancipation, Sien was often seen wearing overalls and using tools, while the men on the show would clean the house and do the dishes. Sien performed her character until May 2012. 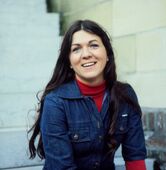 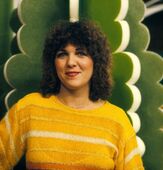 Sien Diels in the early 80s with a new hairstyle
Add a photo to this gallery
Retrieved from "https://muppet.fandom.com/wiki/Sien_Diels?oldid=1076764"
Community content is available under CC-BY-SA unless otherwise noted.