"Sing Your Synonyms" is a Sesame Street song sung by Maria and Luis. In this sketch, they portray a couple who visit an art gallery. While there, they each give the same opinion on various works of art, but use different terms; for example, Luis thinks that a big painting is tremendous, while Maria thinks it is enormous. Eventually, they argue over whether a painting is fantastic or terrific, leading the various pieces of art (portrayed by other Sesame Street characters) to lead into a song, similar to "Let's Call the Whole Thing Off," about how a lot of different words can mean the same thing.

Susan and Gordon's faces appear in place of the faces of an Egyptian painting, Telly Monster's face appears in place of the Mona Lisa's, Elmo appears inside a small suit of armor, and Bob appears as a statue of Atlas holding a big globe.

This song also appeared in the 1988 special Sesame Street, Special. 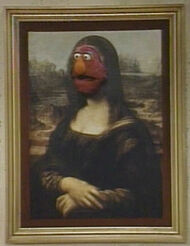 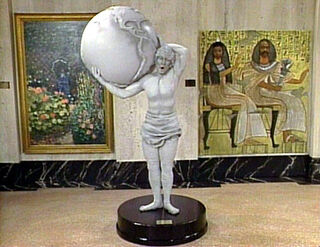 Add a photo to this gallery
Retrieved from "https://muppet.fandom.com/wiki/Sing_Your_Synonyms?oldid=1170758"
Community content is available under CC-BY-SA unless otherwise noted.