Sing a Song of Sixpence

Sing a Song of Sixpence is an English nursery rhyme dating back to at least the eighteenth century. References to the title can be traced back even further, including William Shakespeare's Twelfth Night. Some scholars contend it stems from a 16th practice of amusing dinner guests with live birds placed in pies, while others cite the wedding of Marie de Medici and Henry IV of France as inspiration.

The most common form of the rhyme is

“Sing a song of sixpence, a pocket full of rye. Four and twenty blackbirds, Baked in a pie.

When the pie was opened, the birds began to sing; Wasn't that a dainty dish, to set before the king?

The king was in his counting house, counting out his money; The queen was in the parlour, eating bread and honey.

The maid was in the garden, hanging out the clothes; When down came a blackbird and pecked off her nose.”

The rhyme itself has been referenced for centuries, including Agatha Christie's short story Sing a Song of Sixpence, Rankin/Bass' The Last Unicorn, The Three Stooges' short Sing a Song of Six Pants and the Doctor Who episode "The End of Time." 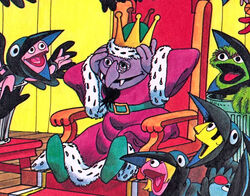 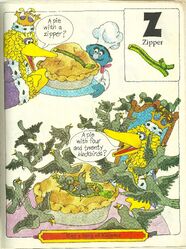 Big Bird as the King sees a pie with a zipper and counts the blackbirds
Wikipedia has an article related to:
Sing a Song of Sixpence
Community content is available under CC-BY-SA unless otherwise noted.
Advertisement