Unlike the other babies, Skeeter was created specifically for Muppet Babies in 1984. With Miss Piggy being the only major female character in The Muppet Show cast, Skeeter was introduced as another female figure. An athletic young girl, Skeeter balances Piggy's ultra-feminine role.

Skeeter is characterized as energetic, gutsy and spirited, but at times, she can be a bit of a show-off. She and her brother Scooter would occasionally show signs of sibling rivalry in the nursery, with Skeeter often calling her brother a "nerd." While she often expressed interest in being an athlete or gymnast, her brother was more interested in computers and books. The episode "Gonzo's Video Show" reveals that she is younger than her brother, but "only by a minute."

As the only two girls in the group, Piggy and Skeeter would often compete for the female roles during the babies' imaginary play time. Examples can be seen in the second season episode "Snow White and the Seven Muppets," wherein they fight over playing Snow White, and in the fourth season's "Masquerading Muppets," in which Skeeter becomes jealous that Piggy "always gets to be queen."

Like many female Muppets, Skeeter was performed by male actors. Howie Mandel voiced the character for the first two seasons of Muppet Babies, after which Frank Welker took over the role.

A photograph of Baby Scooter and Skeeter has been seen in Miss Nanny's house in the 2018 version of Muppet Babies throughout the first season. Skeeter, along with Scooter, makes her first full-fledged appearance in the series' second season episode "Win a Twin / Skeeter and the Super Girls."[1]

Skeeter is now played by voice actress Cree Summer and is redesigned with large, yarn-like pigtails and a sports-inspired purple track jacket (similar to the one adult Scooter wore on The Muppet Show). The clothing color palette (purple, magenta, pink and cyan) chosen for her redesign, and the style of glasses she wears, mirror that of Amy Mebberson's character notes for the adult Skeeter in "The Muppet Show Comic Book: Family Reunion," while the design of her shirt (a soccer ball), and the tips of her sneakers (basketball and baseball designs) continue to be in line with her sporty persona, established on the original show. Both twins wear watches on this iteration, Skeeter's in the design of a baseball. In addition, Skeeter can be seen doing adult Scooter's trademark arm swing during their introduction.

While her brother could occasionally be seen without his glasses on the original series, Skeeter took hers off for a good while in "Skeeter and the Super Girls," exposing her small, black button-eyes.

A pre-teen version of Skeeter appeared in several Muppet Kids books where she was seen living with her brother and their dad. She is often depicted wearing a green shirt and a skirt. Similar to her younger incarnation, Skeeter has a lot of energy, and continues her love for sports. She is more outgoing than her brother, and maintains a friendship with Janice and Piggy.

She has starring roles in "The Trouble with Twins" and "What a Mess!" along with featured appearances in "8 Great Stories for Kids," "New Kid in the Neighborhood," "The Best Gift of All," and "Piggy Can't Wait." 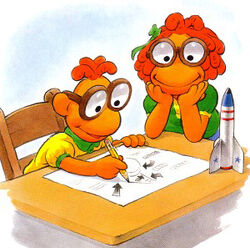 Skeeter and her brother Scooter in the Muppet Kids series.

Skeeter has only rarely appeared as a grown-up character outside of Muppet Babies and Muppet Kids, the most notable appearance being in a 2010 comic book arc.

Initially, her appearances are fleeting references, the first of which kept her hidden from view. When Fozzie Bear encounters two of his friends dressed as a giant in "Fozzie's Costume" (from the 1991 storybook It's Story Time), he finds Scooter peering out through the jacket, while Skeeter (atop his shoulders), speaks to Fozzie obscured within the mask.

Her face is later seen in minor appearances on a Carl's Jr meal bag in 1993 and in the "Muppet Pick-Me-Up Book" You've Still Got Me released in 1995.

The most development has been given to Skeeter as an adult when she featured prominently in The Muppet Show Comic Book during the "Family Reunion" story arc. Much like her role on Muppet Babies, she has a complicated relationship with Miss Piggy; in one moment she appears to extend an olive branch, but in the same beat, plants an immature sign on Piggy's back. During her time at The Muppet Theatre, she affectionately refers to Scooter as a nerd, manipulates Andy and Randy as pawns in a practical joke on Piggy, takes a misplaced interest in Robin's well-being, and poses as Fozzie's girlfriend. As the story comes to a close, Skeeter heads back to college to finish her degree in archaeology, while also revealing that she is Agent X, an assistant for world famous detective Wormwood Soames. The dialogue throughout the four-part arc avoids using her name and the character is referred to as "Scooter's sister" throughout the story.[2] This was due to concerns over the legal gray area of whether or not the Muppet Babies character was included in Boom Studio's license agreement with Disney. Roger Langridge later cited that an arrangement was reached between Boom and Disney, and she finally signs a letter at the end of the story, as "Skeeter."

A similar-looking adult Skeeter also made background cameo appearances in the 2010 comic Muppet Sherlock Holmes and in the 2012 storybooks Green and Bear It and The Twelve Days of a Muppet Christmas (and a Chicken in a Pine Tree). These were illustrated by Amy Mebberson who had drawn the "Family Reunion" story. In 2011, Mebberson stated "I am determined to re-establish Skeeter as canon if it kills me."[3] 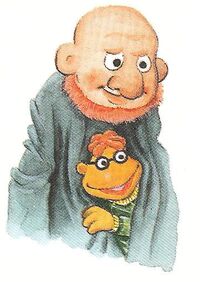 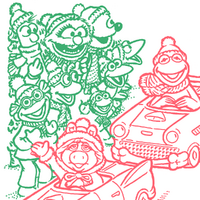 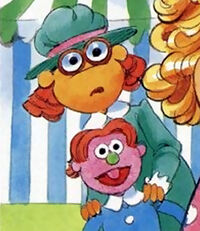 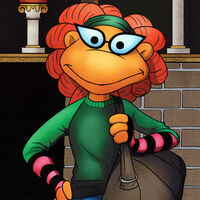 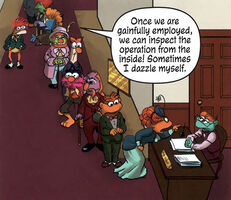 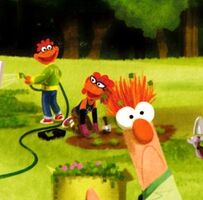 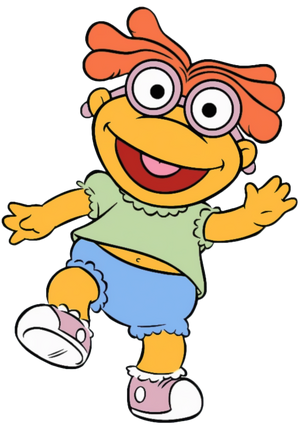 “As for the adult Skeeter, Henson Associates art director Michael Frith once explained that she's now a famous explorer, never seen again after an expedition to the jungles of the Amazon!”

When asked in 2009, "Whatever happened to Skeeter?", Muppet writer Jim Lewis stated:

“Ahh, Skeeter. I wasn't there for the creation of the "Muppet Babies" animated series, but I suspect she was added to the show so there'd be another (dare I say, more balanced than Baby Piggy) female character on a show aimed at kids. We threw around various bizarre scenarios about what happened to Skeeter after "Muppet Babies," but none of these were ever confirmed. Frankly, I suggest contacting the Federal Witness Protection Program for more info. Let us know what you find out.[4]”

During a 2014 interview on the Inside the Magic podcast, Kermit the Frog explained that Skeeter has been on meditative retreat ever since becoming a Buddhist; and when asked about his sister during a 2015 Twitter Q&A, Scooter replied: "Skeeter is currently studying overseas. And if she ever reaches dry land, she'll come visit."[5]

A fan-made podcast entitled Skeeter-ial: A Muppet Babies Investigation launched in 2017 and takes a comedic episode-by-episode look at the original Muppet Babies in search of clues to explain what could have happened to Skeeter.