SkekAyuk is the Skeksis half of AyukAmaj, and serves as the Gourmet at the castle's court.

Like all the Skeksis, SkekAyuk wears an elaborate costume. A large handkerchief is tucked in his sleeve to dab his mouth. He loves to eat, and is often seen stuffing food into his cheeks, often disavowing eating implements in order to get the food in him all the faster. Unsurprisingly, he is the fattest of the Skeksis.

SkekAyuk commands a host of slaves to create complex meals for the Skeksis - including Roast Nebrie (a Skeksis favorite). Yet in spite of all this, the Skeksis' spiritual disjointment makes them leave each banquet still raging with hunger. In contrast, skekAyuk's alter ego, the Mystic cook urAmaj, prepares very simple and very satisfying meals by hand.

Nor did the feasts prepared by skekAyuk the Gourmand and his teams of harassed slaves satisfy any appetite for long. Hot spices, sweet liquors, cream-rich sauces, were his delight; and he boasted he had a different menu for every feast.The World of the Dark Crystal

Pre-production notes for the film, as shown in The Making of the Dark Crystal, describe the Gourmet as follows:

a jowly, sweaty head with bushy eyebrows, and to be continuously involved with burping, spraying food and saliva as he talks, stuffing food into his cheeks, and lifting his head to swallow, like a pelican...Wine stanes and bits of incrusted food cover his clothing. Slave are always carrying trays of food for him - silver goblets, small sugar things, tudbits for him to nibble...Body bulges, tummy pops buttons, slits gape, pink extrudes.

Jim Henson noted in The World of the Dark Crystal that many of the Skeksis were based on the seven deadly sins. SkekAyuk clearly represents Gluttony. 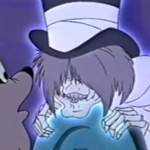