SkekEkt is the Skeksi court Ornamentalist, or designer, at the castle. His Mystic counterpart in the Valley of the Mystics is urUtt the Weaver.

“And skekEkt the Ornamentalist made clothes, above all for himself, rich fabrics that dripped jewels, the death of a hundred birds for one cloak. He first discovered the art of anointing the skin with a paste of clotted blood and diamond powder, to restore the sparkle of youth.”
—The World of the Dark Crystal

Pre-production notes for skekEkt refer to him as an artist and interior designer. Jim Henson said, "We've never known whether these Skeksis were male or female. We always kind of liked the idea of them being some uncomfortable mixture in between, but the Designer is certainly the most feminine or effeminate." The Skeksis' love of fashion and luxury helps maintain skekEkt's position at court. SkekEkt's appearance is described in Henson's film notes to be "heavily made up with jewels and equipment of mascara".

In accordance to the Skeksis being based on the Seven Deadly Sins, SkekEkt seems to represent Vanity. 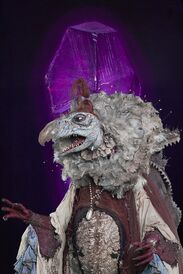 The Ornamentalist in The Dark Crystal: Age of Resistance, performed by Alice Dinnean.
Add a photo to this gallery
Retrieved from "https://muppet.fandom.com/wiki/SkekEkt?oldid=1216790"
Community content is available under CC-BY-SA unless otherwise noted.