SkekOk is court Scroll Keeper for the race of Skeksis. SkekOk's mirror image amongst the Mystics is urAc the Scribe.

The Scroll Keeper is the smallest of the Skeksis, a fact which gets him picked on and laughed at. Yet skekOk has his own power, he is able to rewrite the Skeksi histories to suit his allegiances and propaganda needs -- which he does. SkekOk's traditional loyalty is to the Ritual Master skekZok. The World of the Dark Crystal mentions that skekOk is the least honest of all the Skeksis.

“SkekOk the Scroll-Keeper kept the record of the Skeksis; he was the smallest, finest-featured, least honest of them all. He wrote and rewrote his accounts, and kept changing them to please one or another of his shifting allies. The truth was soon lost.”
—The World of the Dark Crystal

Known as the Historian in pre-production notes for the film (and the end credits), skekOk is also akin to a professor, librarian or solicitor. His robe is described as "pleated, printed pages resembling a book...bookmarks may protrude from the robe, and his surcoat may resemble a green tooled leather cover with marbled flyleaves." However, the most noticeable feature of the Scroll Keeper in the film is his eyeglasses.

He can sometimes be seen taking notes when the Skeksis meet, despite the fact that he is known to arrive late. Early character plans focus on a two-sided personality of skekOk: "When head projects out of collar, he assumes an academic, pedantic tone. When head retreats into collar, he assumes other persona -- babbling, cackling, childlike, falls asleep like dormouse." 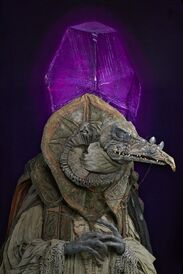 The Scroll Keeper in The Dark Crystal: Age of Resistance, performed by Neil Sterenberg.
Add a photo to this gallery
Retrieved from "https://muppet.fandom.com/wiki/SkekOk?oldid=1289099"
Community content is available under CC-BY-SA unless otherwise noted.