The Skeksis are the villainous race in The Dark Crystal, one of two species to emerge when the Crystal cracked and divided the urSkeks.

The creatures are described in detail in the book The Making of the Dark Crystal: "For every Mystic there was a corresponding Skeksis... The Skeksis had control of the castle where the Crystal was kept; in its chambers they practiced their evil arts, hating one another as much as they hated the rest of the world."[1]

Possessing all of the negative attributes of society, and none of the positive ones, the Skeksis live out a superficial existence of intrigue and plots against each other while struggling to retain their grip on Thra. They keep essence-drained Podlings as slaves, have their own personal army in the Garthim, and absolutely despise Gelflings, a race they think they have completely exterminated. There were originally eighteen Skeksis, but by the time of the Great Conjunction when they rejoined the Mystics, only eight remained. Skeksis is both singular and plural, but the plural form is pronounced 'Skek-sees'.  They say "Hmm" when they are thinking, when they are confused, and when they are fascinated (for example, when SkekSo dies).

As mentioned above, eighteen Skeksis existed to begin with; being formed from the evil sides of the Urskeks. Eight had died by the events of The Dark Crystal, with another two perishing during the events of the film.

The following ten Skeksis were alive during the events of the film: 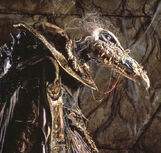 The prequel series Legends of the Dark Crystal introduced four more Skeksis (two of which have been introduced in puppet form since): 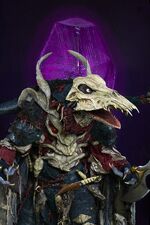 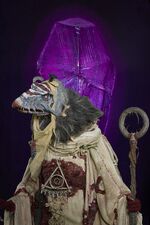 The remaining Skeksis that appear in other media such as novels and graphic novels are: SkekHak, SkekYi, and SkekLi the Satirist – which brings the referenced count of eighteen Skeksis known to have existed up to nineteen.

In The World of the Dark Crystal, Jim Henson commented that the Skeksis were based on the Seven Deadly Sins, but that since there were ten Skeksis in the movie and only seven deadly sins, they used some sins twice or simply made some sins up.

Originally the Skeksis spoke an alien language based on ancient Greek and Egyptian, specially created for them by linguist Alan Garner. Jim Henson stated, "My whole approach to this film is visual. I wanted as little dialogue as possible because I believe the story is stronger that way. Dialogue becomes a crutch. If you have all these alien-looking creatures, why should they be talking in English? An early concept was to have the Skeksis just making noises, but in a way you knew what they were saying." Gary Kurtz responded to the non-English version stating, "The audience thought that they were missing something. Actually, they didn't need to understand the Skeksis' dialogue at those points. The translation of what was being said is really quite banal. The strength of those scenes was instinctively knowing what's going on...But the Skeksis scenes were quite long. You had to concentrate. The audience wasn't prepared to do that." The response of the test audiences led to the replacement of the Skeksis language with English dialogue.