Sky is a broadcasting and streaming media company that serves as Europe's largest pay-TV broadcaster with over 20 million subscribers. It consists of several subsidiaries, including:

In March 2014, the network aired a thirty minute behind-the-scenes feature on Muppets Most Wanted. In November the same year, a television commercial aired to promote the channel's Christmas lineup of movies, including Muppets Most Wanted, in which a family finds themselves as Muppets during a production of The Muppet Show. 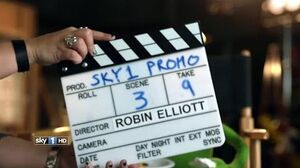 Sky 1 promos for M15
Add a photo to this gallery
Wikipedia has an article related to:
Sky plc
Retrieved from "https://muppet.fandom.com/wiki/Sky?oldid=1303789"
Community content is available under CC-BY-SA unless otherwise noted.