Sleepytime Bird is a collection of bedtime songs, as the residents of Sesame Street sing some of their favorite lullabies to Big Bird to help him sleep. It was reissued on cassette by Golden Music as Sleepytime on Sesame Street in 1990. 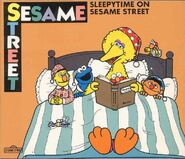