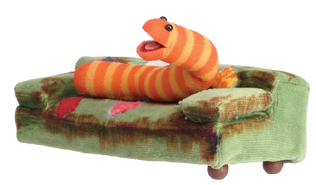 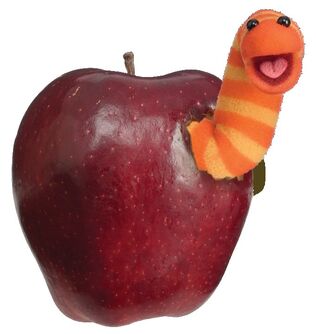 Slimey is Oscar the Grouch's pet worm. Originally, Slimey was a silent character who communicated with squeaks and gestures. In recent years, he has developed a voice, provided by Dick Maitland (which is digitally manipulated in post-production to achieve a higher pitch). Slimey shows skill at playing the tuba and the clarinet, and has the distinction of being the first worm on the moon.

Slimey's earliest known appearance is in a second season episode in which Oscar enters Slimey in a Sesame Street Pet Show. [1] A study done in 1971 by Children's Television Workshop's research department reviewed children's responses to this episode, and specifically noted that the children "were attentive, responsive, and loved Slimy, the worm." [sic] [2]

In another early episode, Oscar accidentally locks himself out of his trash can. Tom suggests that he saw the lock off, but that would ruin the new lock. Luis offers to pry off the lid with his crowbar, but that would dent the lid. Oscar is saved when his pet worm Slimey slithers the key out through the crack between the can and the lid. [3]

Slimey's family includes his baby sister Sloppy, his parents Dusty and Eartha, and cousins Squirmy and Rachel. Sloppy is referred to as Stella in a 1985 episode. In a 2008 episode, Slimey got a pet bug named Dirty.

Slimey enjoys having chapters of "Trash Gordon" read to him before he goes to bed at night. He loves all kinds of books. [4]

The first time Slimey and Oscar met was when Oscar went to the park on a rainy day to see the mud puddles and found a mud puddle with a lot of worms playing in it. He then saw a baby worm playing by himself, who saw Oscar and crawled up his shoulder and fell asleep. Oscar took the worm back to his trash can and named him Slimey. This segment can be viewed on Sesamestreet.org.

Retrieved from "https://muppet.fandom.com/wiki/Slimey?oldid=677980"
Community content is available under CC-BY-SA unless otherwise noted.