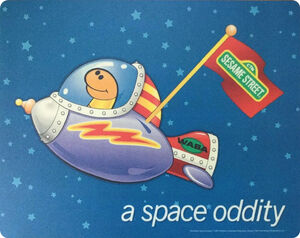 In 1997, during the lead-up to Sesame Street’s season-long story arc Slimey to the Moon, a mouse pad was released as a promotional item for the show's curriculum.

It features an Ernie Kwiat illustration of Slimey piloting a solo space vessel branded with the WASA logo, flying a flag with the Sesame Street sign.

Labelled "A Space Oddity" (a reference to 2001: A Space Odyssey and David Bowie's 1969 song of the same name), the mouse pad was made by Photo Pad for Children's Television Workshop and Jim Henson Productions.

Add a photo to this gallery
Retrieved from "https://muppet.fandom.com/wiki/Slimey_%22A_Space_Oddity%22_mouse_pad?oldid=1279621"
Community content is available under CC-BY-SA unless otherwise noted.