Slimey to the Moon

Slimey to the Moon describes a Sesame Street story arc that took place in 1998 in which Oscar the Grouch's pet worm Slimey ventured to the Moon.

Although Slimey's arc didn't launch until nearly a third of the way through Season 29, a 1997 press release for the show's broadcast on PBS dubbed the season "The Science of Discovery" — the first ever science-based curriculum for preschoolers. The announcement further explained that the 18-week story line would "encourage preschoolers' natural sense of curiosity and exploration while teaching them about the wonders of science and space."

CTW also held a press conference with Oscar and Slimey on July 10, months ahead of the season premiere — timed one week after NASA landed the Pathfinder rover on Mars and the same weekend Carl Sagan's Contact was released in theatres (many newspapers covered the stories together in their science sections). While Oscar and Slimey posed for pictures, research director Rosemarie Truglio noted, "we know that children are fascinated and they're eager to learn more about space travel" and placed an emphasis on the series' lessons on conflict resolution, problem solving, persistence, and listening. Head writer Lou Berger explained that the scripts would "blend a sense of wonder and silliness".[1]

Closer to the season premiere in November, Truglio told Kenneth M. Chanko of the New York Daily News that "there's no way to pre-test to know for sure that 2 and 3-year-olds will follow a story arc for that long a time" (since many episodes won't be about Slimey). She adds that they've included teasers to the end of episodes to help young viewers follow along. When Chanko asked "why Slimey" instead of another character, Berger explained that because Slimey can't talk, there isn't the same level of emotional investment (citing an episode where something goes wrong on the spaceship). He adds that the story also allows for Oscar to show his softer side, as he experiences separation anxiety while his pet is away.[2]

Closer still to the beginning of the first episode in the arc, Berger and executive producer Michael Loman focused less on the academic side of the series in an article for the Los Angeles Times, and teased a subplot in which a chicken stows away on the ship... but no one sees it, except for the farmer whose chicken it is.[3]

The LA Times article also noted that a NASA advisor reviewed all the Slimey scripts. Truglio emphasized on CTW's website that they worked closely with NASA to ensure that the scripts not only satiated children's natural curiosity, but were also factually accurate.[4]

Just prior to the broadcast of the first episode, Oscar made an appearance at the Beverly Hills Planet Hollywood to donate the worm space suit that Slimey wore on his journey. The prop went on display in the restaurant among other famous pieces of movie memorabilia.

Oscar and Slimey also made an appearance 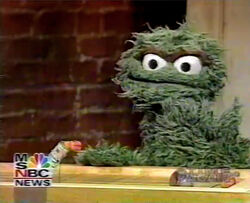 on Today to discuss the venture; Slimey wearing his spacesuit.

Twelve years before the first Slimey episode aired, Norman Stiles had written a treatment for a story in which Radar was taken into space. The idea was conceived in response to NASA's proposal to send Big Bird into space on Space Shuttle Challenger, and would have coincided with the real shuttle launch. The proposal was rejected, but elements of the story — such as an extensive training period and the intent to make the arc an integral part of the show — was worked into the Slimey episodes which went into production the season after Stiles left the show.[5]

Sesame Street had previously featured space travel as a theme on a number of occasions, including multiple guest appearances by American astronaut Sally Ride. In fact, Season 29 wasn't the first time Slimey had shown aspirations for reaching the moon.

Seventeen years prior, in Episode 1602, Slimey took part in what Oscar called a successful grouch launch in a rocket, ending in the space vehicle sputtering and falling over (the script described the vehicle as a miniature mock-up of the Space Shuttle Columbia, which had made its inaugural flight five months before the episode was taped).

The following year, in Episode 1713, Oscar helped his pet worm launch a tiny rocket from his trash can, but after two attempts, he only made it as far as his neighbor's windowsills (the episode ends with the implication that they'll keep trying to get closer).

Restricted no longer by conventional vehicles, Slimey used his own body as a rocket booster in Episode 2066 as a means of subtracting himself from Oscar's carnival barker routine.

Going back to basics, Slimey perfected his piloting skills in Episode 3067 where he's compared to Chuck Yeager (a figure in aviation history credited with laying the groundwork for the test pilots who would become the first astronauts).

Oscar himself made it as far as low-Earth-orbit in Episode 1714 (four years after the first Grouch landing on the moon as reported in newspapers during A Special Sesame Street Christmas), and several other characters have imagined themselves on the lunar surface.

At least a dozen episodes dedicate themselves entirely to the moon story, while several others throughout the season made references to Slimey's journey. One recurring segment, Worms in Space, features Slimey's WASA crew mates on their ship the Wiggleprise forming letters and numbers with their bodies in zero gravity. Tony Bennett appears to sing "Slimey to the Moon" which is repeated twice, the space-themed songs "Planets, Moon and Stars" and "Moonshine" appear, and two "Postcard from Space Camp" segments were filmed at NASA's Kennedy Space Center and Space Camp with Miles and Gabi.

see below for an episode-by-episode rundown

In 2005, Cookie Monster becomes fixated on the moon in Episode 4090, where Gordon tries to inform him that the moon is not a cookie. Not convinced, Cookie consults with Slimey, whom he knows has actually been there. Unable to definitively answer his question on the grounds of not having tasted it while he was there, Slimey makes a call to WASA who promptly return to Sesame Street in order to provide passage to the moon for Cookie Monster. After missing the launch because he can't fit inside the worm-sized rocket, Cookie dashes off to find another way to get there. As Gordon reiterates that he's been trying to tell him that the Earth's natural satellite shares no characteristics with a pastry, Slimey regrets not tasting the moon when he had the chance.

Outside of the episodic narrative, Slimey's star-flung exploits were featured in the book Slimey to the Moon consisting of Slimey as a finger puppet popping through each page of the book, and a coloring book called Slimey in Space which included several other Sesame Street characters embarking on space travel. In the February 1998 issue of Sesame Street Magazine, the story was retold as "The Amazing Adventures of Slimey" and featured a cutaway view of the Wiggleprise and a pull-out poster of Slimey on the moon. Other merchandise featuring Slimey in space includes a 1997 Tyco PVC, a mouse pad, and a 2018 Legler puzzle.

Another 16 years later, Slimey went to space for real. In 2014, NASA tested its Orion Multi-Purpose Crew Vehicle as a replacement for the Space Shuttle program. In an effort to engage public interest — and to help contribute to the weight needed to simulate a human crew and their supplies — several pop culture items were carried by the vehicle into space. Among them was a Slimey puppet which was returned to Sesame Street by astronaut Ricky Arnold.

The legacy of Slimey and his fellow wormonauts continues in references found in the "Astronauta" volume of the Los oficios de Elmo series of books, in the form of a WASA logo in a window on the side of Hooper's Store as seen in Sesame Street at SeaWorld, and a cameo made by Slimey piloting a Space Shuttle in the 2019 animated adaptation of "I Don't Want to Live on the Moon".