Sneak Peek Previews was a Sesame Street segment in which Oscar the Grouch and Telly Monster sat in a movie theater and reviewed films. Telly gave the films a number of "wows" (or "yays") while Oscar gave them "phooeys" and vice versa. Telly would usually end up sitting in a broken chair, causing him to spill his popcorn all over the place.

Originally, the films up for review were existing live action or animation inserts. Starting in season 20, the segments instead featured original pieces starring various Anything Muppets spoofing notable films.

The segment was inspired by the television show Sneak Previews hosted by Gene Siskel and Roger Ebert. On that show, Siskel and Ebert reviewed movies and gave them "thumbs up" or "thumbs down" ratings.

The format of these sketches was used in the video Sing Yourself Sillier at the Movies, as well as some compilation screenings shown during the "Sesame Street: The First Generation" exhibition in 1989. 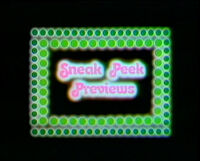 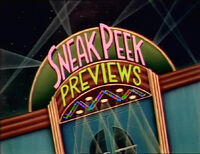