Sounds Around is a line of toys produced by Hasbro under the Playskool label in 1989, as a copycat of Mattel's popular See 'n Say toy. As with See 'n Say, the front of the device is shaped like a clock face with a number of pictures arranged around the center. The large, arrow-shaped clock hand in the center can be rotated to point at one of the images, then a lever is pulled to play a corresponding sound. The hand spins clockwise as the sound plays. 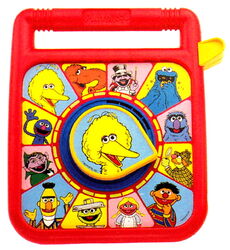 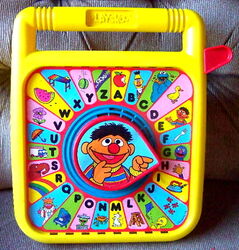 "Ernie's ABCs": Ernie teaches the alphabet by pointing out words that begin with each letter. 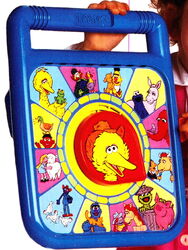 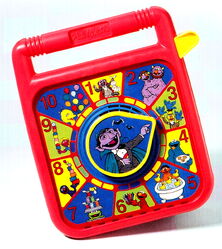 "Counting with the Count": Count von Count introduces the numbers up to ten.
(1992)
Add a photo to this gallery
Retrieved from "https://muppet.fandom.com/wiki/Sounds_Around?oldid=1100919"
Community content is available under CC-BY-SA unless otherwise noted.