Spamela is a parody of actress Pamela Anderson, star of TV's Baywatch, while her name is also a nod to the meat product Spam. Appropriately, Spamela was primarily seen in the recurring Muppets Tonight sketch "Bay of Pigswatch." Other notable appearances on the series include her portrayal of the titular "Firefly" in episode 106, her frenetic dance with Ernest Pleth in episode 107, and being among the Muppets auditioning to be Gary Cahuenga's new partner in Episode 210. She also showed up in a TGIF bumper when Kermit the Frog and Clifford hosted on March 1, 1996.

After Muppets Tonight, Spamela made a cameo in episode 19 of From the Balcony, in which she walks past the "Beach House" (a thinly decorated balcony) at the end of the episode, her beauty prompting Statler and Waldorf to rush off the balcony in a contest to get to her. In an "outtake," she dances in the balcony with the critics, causing Waldorf to have heart and back problems. She also makes a cameo in Muppets Most Wanted during the wedding scene.

In print, Spamela appears as the titular character in the Muppet Snow White comic. Speaking with Tough Pigs, writer Jesse Blaze Snider explained that he didn't want to use Miss Piggy in a boring role, and went on to describe how he once chose the character to lead a pitch for Muppets: The Bachelorette. (YouTube)

Initially, Spamela was performed by Kevin Clash, while Leslie would do her lines off-screen.[1] 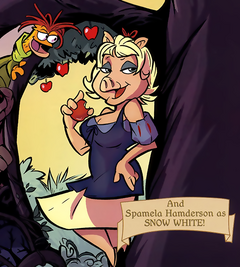 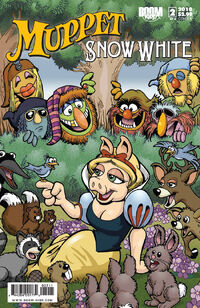