Spittoons are receptacles (usually made of brass) for, well, spitting, specifically residue from chewing tobacco (or dipping tobacco). They were a common feature placed on the floor in saloons, hotels, banks, and other places where men tended to gather.

The practice began to die out in the 1930s, apart from a few regional exceptions. Spittoons today are most often encountered in Western movies or television, and occasionally in seedy bars often near the piano player. 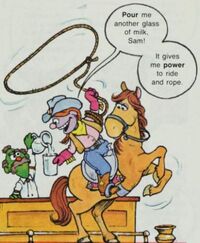 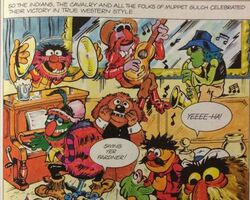 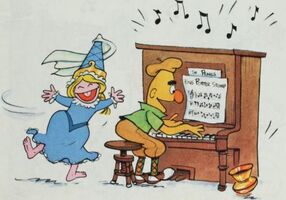 When Princess Penelope teaches piano to Prince Paul, a spittoon is visible in two panels, vibrating from the music.
"The Princess and the P"
Big Bird's Sesame Street Dictionary Vol. 3
Add a photo to this gallery
Retrieved from "https://muppet.fandom.com/wiki/Spittoon?oldid=1101000"
Community content is available under CC-BY-SA unless otherwise noted.