Splurge is a tall purple monster, who appears in the special Hey Cinderella! The deep-voiced, almost monosyllabic Splurge expresses a great fondness for radishes.

The puppet was built in 1965 for the first Hey Cinderella pilot, and he has the distinction of being the first larger-than-life Full-Bodied Muppet that Jim Henson built.

Splurge appeared in a sketch on The Ed Sullivan Show in 1966. Instead of his usual purple fur, his fur is blue. He is also referred to as being the mother of a small monster. He also made a cameo in a La Choy presentation reel.

A slightly altered version of Splurge made a few appearances on Sesame Street during the first season, including episode 0015. This version is distinct from the full body form in that Splurge's mouth doesn't move, and he has large eyelashes, rather than a unibrow.

In 1998, the Jim Henson Company created "Jim Henson's Scary Scary Monsters", a new line of children's books inspired by Jim Henson's early sketches. The books introduced seven monster friends who live in the secret land of Ovadare. Six of the monsters were created for the book line -- and the seventh was Splurge.

Splurge's personality underwent a change for the book series; the back cover of the first book describes him this way: "Splurge is like a big, big baby. He's scared of mostly everything, except butterflies." Splurge carries around a "cuddle" wherever he goes; the cuddle is a rock, and he has a wooden box full of spare cuddles.

Splurge starred in his own Scary Scary Monsters book in 1999. In New Friend, Blue Friend, Splurge finds a furry blue bedroom slipper, which falls over the waterfall from Somewhere Else (the monsters' name for our world). Splurge names the slipper Floofy and makes it his new cuddle friend.

More recently, Splurge was given his own page in The Muppets Character Encyclopedia.

A plastic hand puppet was released in 1970 in conjunction with the release of Hey Cinderella! along with a promotion on cans of Hawaiian Punch. A Splurge "shoelace muncher" was released in a set of Jim Henson's Scary Scary Monsters KFC promotional toys in 1999. 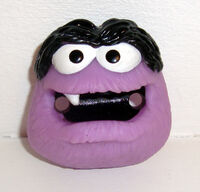 Splurge Shoelace Muncher
Add a photo to this gallery
Retrieved from "https://muppet.fandom.com/wiki/Splurge?oldid=1182150"
Community content is available under CC-BY-SA unless otherwise noted.