The Stage Door of The Muppet Theatre is the rear entrance by which the cast and guest stars of The Muppet Show usually enter and exit the theatre. The entrance is located in an alley which leads into a reception area most commonly staffed by Pops where he greeted every guest in the fifth season.

The exterior of the door was notably seen in episode 204 where Rich Little was interviewed by a group of reporters, episode 316 where Statler and Waldorf hid from Manny Kaye, and the end of The Muppets Go to the Movies when Kermit unknowingly locked Lily Tomlin and Dudley Moore in for the night. It was also the location of a skit at the end of The Muppet Show 2 where Fozzie Bear similarly gets locked in.

Notable uses of the stairway leading from backstage to the Stage Door/reception area include Rudolf Nureyev's tardy arrival (and Sam's subsequent dismissal) in episode 213, Fozzie returning from group therapy in episode 311, Gonzo's exit after his motorcycle fails to perform in episode 315, and Luke Skywalker's siege on the theatre in episode 417. 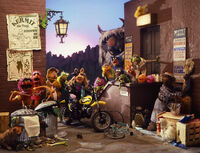 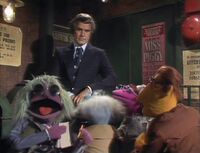 Gonzo exits the theatre in episode 315 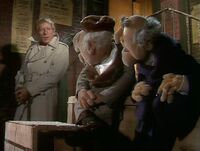 Danny Kaye finds Statler and Waldorf waiting outside in episode 316 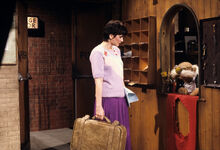 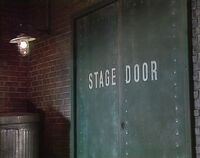 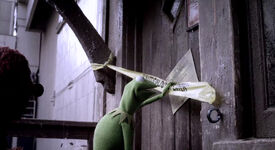 Stage door of the theatre located in Hollywood as seen in 2011's The Muppets
Add a photo to this gallery
Retrieved from "https://muppet.fandom.com/wiki/Stage_Door?oldid=1076859"
Community content is available under CC-BY-SA unless otherwise noted.