Stargate SG-1 is a science-fiction television series, based on the 1994 film Stargate, which ran from 1997 until 2007, first on Showtime and then on Sci Fi. The series focuesed on a team dedicated to exploring the universe through Earth's Stargate and doing battle with enemy aliens. Near the end of the series' long run, two former Farscape stars joined the cast: Claudia Black as alien ally Vala Mal Doran (recurring for seasons 8 and 9, regular for season 10) and Ben Browder as Lt. Colonel Cameron Mitchell (regular for seasons 9 and 10).

For the series 200th episode, simply titled "200" and broadcast on August 18, 2006, the plot is a loose excuse for self-parody and pop culture references. The SG-1 team is assigned to help the producer of a short-lived TV series based on their exploits expand the concept for a proposed feature film. Vala's suggestions, thinly veiled rehashes of The Wizard of Oz and Gilligan's Island, cause the producer to suggest that she pick something more obscure next time. This leads into a brief but elaborate parody of Farscape, set in a grimy spaceship creature and featuring background music riffing on the Farscape theme. Vala appears as Claudia Black's Farscape character, Aeryn Sun, with Dr. Daniel Jackson (Michael Shanks) as Crichton, Teal'c (Christopher Judge) as D'Argo, Samantha Carter (Amanda Tapping) as Chiana, Cameron Mitchell (Ben Browder, the original Crichton) as Stark, and a generic alien puppet prop as Rygel. All of the above flounder around in an angst-ridden manner and engage in a stream of nearly incomprehensible dialogue, combining technobabble with fake curse words, including "frelled," a recurring phrase on Farscape. 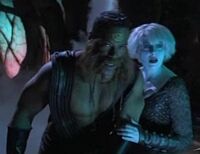 Teal'c as D'argo and Samantha Carter as Chiana 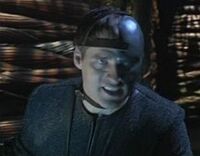 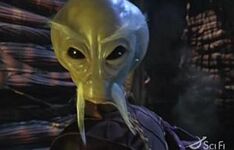 An unreasonable facsimile of Rygel