Along with the Waldorf Action Figure, Statler was featured in the sixth series of Palisades Toys' line of Jim Henson's Muppets action figures. Both hecklers came with the Victorian chair from their theater box, some Muppet vegetables, and a playbill. They also had a special waist articulation, based around the hip mechanism.

The playbill featured a list of Muppet Show acts, such as "Mah Na Mah Na" and "Lady of Spain" by Marvin Suggs. The Avocado was from Episode 305. Also included were two different Muppet tomatoes: one with a sad mouth, which was also included with the Waldorf Action Figure, and a happy one. A green version of the happy tomato was an accessory for the Swedish Chef Action Figure from series 9. 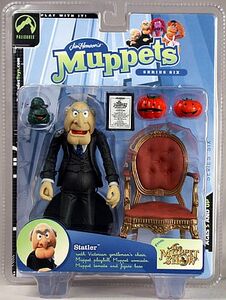