"Stayin' Alive" is sung by Miss Piggy, Annie Sue, and the pigs as the opening number in episode 313 of The Muppet Show. The number is set at the court of Versailles during the French Revolution, with Miss Piggy playing the part of Marie Antoinette in a spoof of the French aristocracy's attempt to avoid the guillotine, which appears at the back of the set in a flash of lightning as the number comes to a close. After the number concludes, Kermit deems the song not only historically inaccurate, but also hysterically inaccurate. 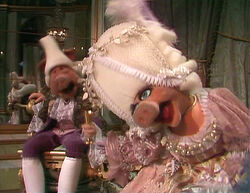 Celebrities including Miss Piggy lip synced the song on American Idol Gives Back. Additionally, Elmo and other Sesame Street Muppet walk-around characters, plus human hosts, sang a short version of the song in the show Dreams of Dancing at Universal Studios Japan (in Japanese).

Wikipedia has an article related to:
Stayin' Alive
Retrieved from "https://muppet.fandom.com/wiki/Stayin%27_Alive?oldid=1240425"
Community content is available under CC-BY-SA unless otherwise noted.