Fozzie in his tuxedo was featured in the ninth and final series of Palisades Toys' line of Jim Henson's Muppets Action Figures.

His ventriloquist dummy Chuckie from The Muppet Show episode 207 was included as a pack-in figure. Originally he was meant to be able to fall apart only at the hat, ears, & hair like he did on the show. Fozzie can hold the microphones in his hand. The book is entitled "Telling Jokes, Made Easy (A complete guide to becoming the funniest bear in town)". Fozzie's top hat is not magnetic like other figures' hats. 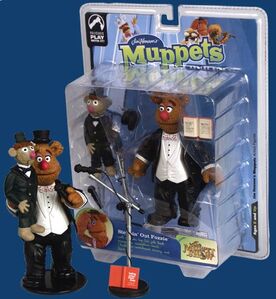