Steve Schirripa (b. 1958) is an actor best known for his role as Bobby Baccalieri in the television series The Sopranos. He appeared with his Sopranos co-star Tony Sirico in Elmo's Christmas Countdown, where he portrayed Ernie alongside Sirico's Bert in "The Bert and Ernie Christmas Special", and the television special A Muppets Christmas: Letters to Santa. On December 17, 2008, he appeared on Today to promote the NBC special.

Schirripa also had a small role as a croupier in the Creature Shop-effects film The Flintstones in Viva Rock Vegas.

Schirripa's other TV credits, usually as comedic mobster types, include guest spots on Angel, Law & Order, Enterprise, and the animated series Justice League (as a goon who tangles with the Huntress in "Double Date"). Film credits include Fear and Loathing in Las Vegas, Joe Dirt, and Must Love Dogs. 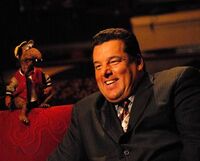 Schrripa with Rizzo the Rat
Add a photo to this gallery

Wikipedia has an article related to:
Steve Schirripa
Retrieved from "https://muppet.fandom.com/wiki/Steve_Schirripa?oldid=1076942"
Community content is available under CC-BY-SA unless otherwise noted.