Stevie Wonder (b. 1950) made a guest appearance on Episode 0514 of Sesame Street. He performed "123 Sesame Street" and his hit "Superstition," and talked to Grover. Many of the street scenes from that episode were repeated on the show as inserts.

Kermit the Frog and the Electric Mayhem interviewed the musician in the Spring 1984 issue of Muppet Magazine.

He appeared in "Yakety Yak - Take It Back", a recycling PSA that eventually aired on Sesame Street. 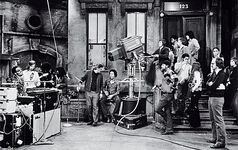 Stevie Wonder on the set of Sesame Street. Frank Oz looks on, at the far right of the photo. 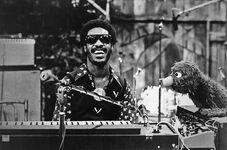 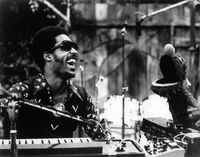 Wikipedia has an article related to:
Stevie Wonder
Retrieved from "https://muppet.fandom.com/wiki/Stevie_Wonder?oldid=1271458"
Community content is available under CC-BY-SA unless otherwise noted.