The Storyteller Fraggle first appeared in the Fraggle Rock episode "The Terrible Tunnel," in which she told the story of Sir Blunderbrain. She was performed by Richard Hunt in her first appearance, and by Terry Angus from then on.

Since childhood, she has had a schoolgirl crush on Travelling Matt, to which he has been oblivious.

Although it is implied that "Storyteller" is just her calling, it seems her name really is Storyteller. This is confirmed in a flashback sequence from Born to Wander. 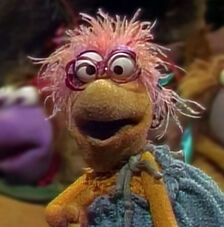 The Storyteller as a young Fraggle, in "Born to Wander".
Add a photo to this gallery

Retrieved from "https://muppet.fandom.com/wiki/Storyteller_Fraggle?oldid=1101188"
Community content is available under CC-BY-SA unless otherwise noted.