Stu was a frogketeer from the Kermit the Frog Club sketch on Muppets Tonight Episode 105. He had a bad short-term memory, and repeatedly announced his name during the frogketeer roll-call.

He also appeared at the end of that episode, making him the only frogketeer (aside from Cindy Crawford) to appear in color. He ended up vaporized by Cindy, using her "supermodel powers." 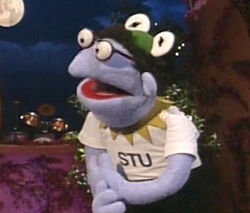 Add a photo to this gallery
Retrieved from "https://muppet.fandom.com/wiki/Stu?oldid=1243672"
Community content is available under CC-BY-SA unless otherwise noted.