Stuckweed appears in the 1999 film The Adventures of Elmo in Grouchland. He is a talking plant who resides in Grouchland and helps Elmo along his journey, through the song "Take the First Step."

The puppet was later recycled on Sesame Street as a female garden plant, performed by Fran Brill, sharing a window box with Stinky in Desperate Houseplants. The puppet also makes various cameos in the center of Plaza Sésamo as Pancho's plant. 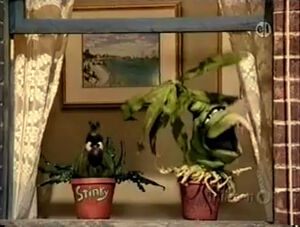 A female Stuckweed on Desperate Houseplants
Add a photo to this gallery
Retrieved from "https://muppet.fandom.com/wiki/Stuckweed?oldid=1306203"
Community content is available under CC-BY-SA unless otherwise noted.